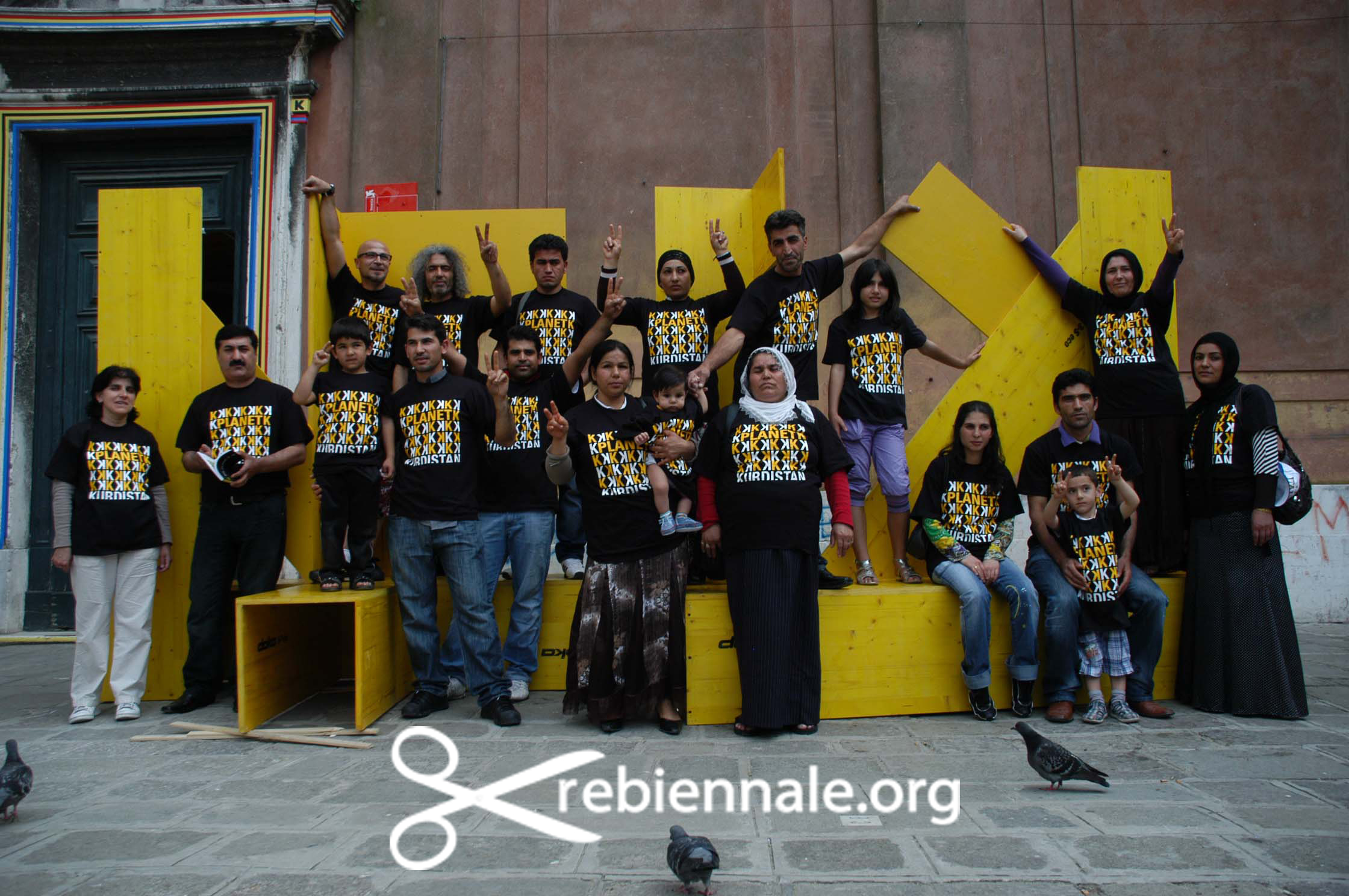 PLANET Kurdistan (part of Krossing) is a laboratory of ideas and projects that has the aim
to contribute to the discussion on the Kurdish cultural identity. It is a collective imagination
process able to represent all of the complexities and diversities of this people and to
encourage a shared future.

PLANET K is a virtual platform, through its web site, and a physical place within the 53°
International Art Exposition – Venice Biennale, staged in San Leonardo in Venice.
With the contribution of the collective of architects, designers and graphics of Rebiennale,
San Leonardo will be turned into a laboratory in which Kurdish artists – and thanks to an
Open Call, all the people who would want to give their contribution – will meet, share
opinions, and collectively build the necessary premises for the definition of a Kurdish
cultural identity.

The Venice Art Biennale is one of the most prestigious international arenas for
contemporary art, a place in which relations between art and national representation meet
in a complex and articulated way. Every country chooses which artists can best interpret
its artistic progress, its open-mindedness and its aspirations. In this context, representing
the art of a stateless nation is the presupposition of a self-determination process. Art not
seen as spectacle, but as an inspiration towards an identification process.

PLANET K aims to be above all a space for debate, comparison and production among
the Kurdish artists, coming from all of the four countries in which the Kurdish people have
been divided – Iran, Iraq, Syria and Turkey -, but also from the ‘fifth’ part, that is
represented by the exiles. The Kurdish Diaspora is indeed a reality of well over one million
and three hundred thousand people only in Western Europe.

In the two weeks before the opening of the Biennale, artists, philosophers, designers,
sociologists, journalists etc. interested in the definition of this collective imagination
process will debate about three fundamental issues, synthesis of the future potentials of
the Kurdish people: Identity, Borders, Language.

Identity
The effort of the Kurdish intellectuals goes in the direction of an identity which reflects the
experience of war, exile, forced migration, but which is also able to see beyond. An effort
which starts from the denied identity (in particular in Turkey were the state represses
systematically the Kurdish identity) and from the intimate identity lived by thousands of
exiled Kurds, towards the claim of a lively identity. Identity as memory, dialogue,
exchange.
Borders
Kurdistan is a region divided by borders rather than enclosed by them. A region separated
in four different national realities whose borders are crossed every day by thousands of
people escaping war, persecution and poverty. Borders are barriers, linguistic, cultural but
also individual barriers met in the ‘host’ countries, which are often inhospitable. Borders,
as those that metaphorically are confining women into a position of second-class citizens.

Language
In the process of building Planet K we were actually communicating in seven languages:
Sorani, Kurmanci, Turkish, Italian, English, French and German. Language is a form of
resistance, especially in states like Turkey, where it is still a forbidden and persecuted
language. Language is the vehicle of a new message for the future, it means being able to
express its own ideas freely. It’s fundamental to manage to communicate your own past in
order to being able to built a solid bases for your future, while making of diversities a
richness rather than an unease legacy.

The 53° International Art Exposition with its title Fare Mondi/Making Worlds inspires this
process of belonging. Not the belonging to an official culture, a state culture, but an
inclusive belonging, in constant definition, open to influences and possibilities for future
development. PLANET K is much more than a national art exhibit, it is a shared space
where our imagination, our aspirations and our ideas can live. It is a new planet.

KURDISTAN
Kurdistan never existed as a national political entity, despite the fact that the Sevres Treaty
(1920) was taking into consideration the possibility of an independent Kurdistan, in the
case that the majority of the people living in that territory requested it. The Treaty of
Lausanne (1923) cancelled this hope and established the division of Kurdistan (region rich
of oil, water and other natural resources) among the states of Turkey, Iraq, Iran and Syria.
Over the years the Kurdish claim to a nation-state have been replaced by a search, often
experimental, of new forms of autonomy. Over the last weeks the talks over a possible first
peace conference to be held in the autonomous region of Iraqi Kurdistan are becoming
more recurring. The aim would be to have around a table all of the parties involved in the
conflict, which has its most violent expression in Turkey.