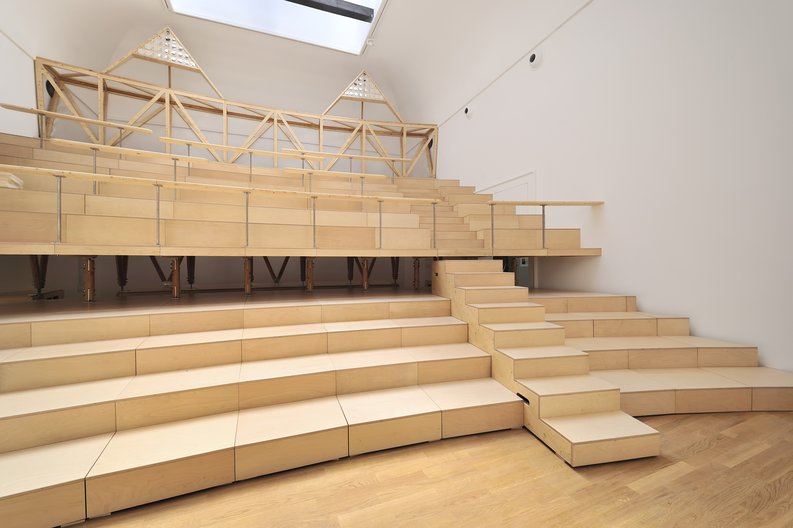 The British Pavilion at the 12th International Architecture Exhibition in Venice, commissioned by Vicky Richardson, Director of Architecture, Design, Fashion at the British Council and under the direction of muf architecture/art Llp, opened to the public on Sunday 29 August 2010.

The Pavilion is ironically reframed Villa Frankenstein, making direct reference to the ideas of the British Victorian social critic and historian of Venetian architecture John Ruskin. It has been conceived by muf as a stage for an exchange of ideas between Venice and the UK. The centrepiece of the Pavilion, represented as a ‘Stadium of Close Looking’, will be a 1/10 scale model of a section of the Olympic Stadium for London 2012, reinterpreted by muf with Atelier One engineers, and built by Venetian carpenters Spazio Legno. This hybrid structure acts as a platform for drawing, discussion and scientific enquiry. Following its use at the Pavilion, it will be reconstructed on another site in Venice as a lasting legacy of the project.

The ‘Made in Venice’ theme is continued through a series of separate installations in the Pavilion including a 15 square metre ecologically functioning slice of salt marsh showing a close‐up view of the native floral and fauna of the Venice Lagoon. Other exhibits include a new project by Wolfgang Scheppe drawing on both Ruskin’s original notebooks and a series of historical photographs of Venice taken by local residents, Alvio and Gabriella Gavagnin. Seven of Ruskin’s Venetian Notebooks (1849‐50) are being lent by the Ruskin Foundation from the Ruskin Library at Lancaster University, and there will be interactive electronic access to his research in Venice.

Debates, workshops, drawing classes and scientific discussions are taking place during the three months of the Biennale, which will lead to a catalogue, edited by Adrian Dannatt, to be published in three chapters across the period of the Biennale, acting as a further creative platform to inform thinking for London as it moves towards 2012.

Villa Frankenstein shifts our perception of Venice as a historic backdrop to the Biennale, to one of a dynamic participant. muf has introduced many new collaborators to the British Pavilion including the schools of Venice, the scientific community, community activists, historians and artists. By emphasising the importance of close looking and observation, which takes many different forms, muf demonstrates an alternative approach to architecture based on understanding what we already have.

Even before John Ruskin and The Stones of Venice, the British have been preoccupied with Venice and in different ways have taken the city home. Villa Frankenstein attempts to breach the Giardini fence by bringing Venice and some of its preoccupations inside the Pavilion as a series of diverse collaborations.