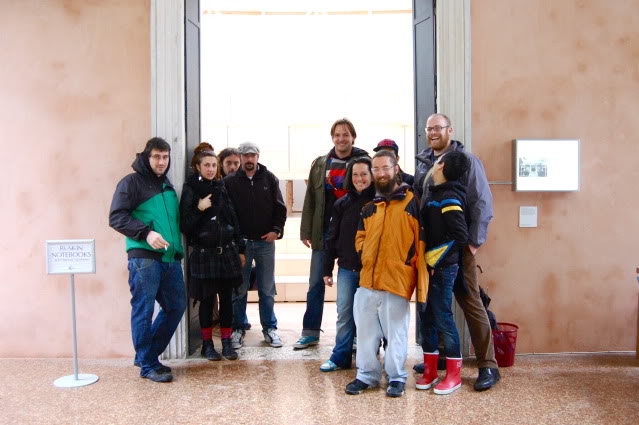 ‘Commons Beyond Building’ is a slogan that describes perfectly the essence of what the Rebiennale is all about, but it is, all told, just that – a slogan – and as such an explanation of all its individual aspects is called for. This can perhaps be done by using an empirical approach, freeing up Rebiennale from all that it was intended to be and examining what it actually means in a practical sense.

Its name alone is evidence of its origins in the Biennale and thus its relationship with the city of Venice. The idea was conceived about two years ago by a group of activists; we won’t describe them as being ‘local’ activists, given that, within the institutional framework of the art and architecture debate, such a term immediately paints a picture of an indigenous and primitive body, a defenceless host that is easy prey for that global parasite that community-based projects have become. The group quickly developed an international profile, with collectives of architects and designers from all over the globe becoming involved.

Rebiennale is aware of the environmentally unsustainable nature of the Biennale, and is sensitive to the fact that dismantling the installations means substantial costs being incurred and materials that are in perfectly good condition going to waste. With this in mind, and in its work of recovering and stockpiling the materials discarded by the Bienniale, Rebiennale set itself up as a network of activists, university students, squatters and international collectives of architects (including, first and foremost, Exyzt, the French architects).

The stockpiled materials are recycled by being put to use when setting up exhibitions in the S.a.L.E – an exhibition space used for alternative art projects, in which context the Rebiennale was first conceived – in the reopening and restoration of public gardens in the St Marta area of the city, in the rebuilding and renovation by the occupants themselves of a number of squats and in breathing new life into another location that could be said to have a place in history as far as action groups in Venice are concerned: the ‘laboratorio Morion’. Rebiennale was involved in the fitting out of Planet K, the Kurdish Pavilion at the 2009 Visual Arts Biennale, and had a hand in the 2009 Global Beach project – a stretch of beach at the Venice Lido taken over for a period in the summer, with its occupiers wanting to draw attention to issues concerning the lack of job security in the country. Rebiennale has also run workshops in partnership with
the IUAV – the Venice University Institute of Architecture.

But Rebiennale is not a free service provided to the Biennale. Nor does it have designs on hiring itself out to the Biennale as a greenwashing consultancy. And while it has on occasion been invited to feature in big-name events on the themes of design, sustainability and the third sector, Rebiennale does not operate as a collective or as a design business. Rebiennale aims at establishing a viewpoint and modus operandi that will flag ways in which one particular urban space can be made common to those in the city as a whole; in doing so, what Rebiennale actually is becomes intertwined with what it is trying to be: an agency through which the ‘commoning’ of the city can be realised.

It is, of course, true to say that the concept of a city as being something that is ‘common to all’ is one that is full of complexities which may never be fully unravelled in practice, and these complexities translate into what is in fact the strength of the Rebiennale project, as well as its weakness. The strength derives from the fact that Rebiennale operates on a vast number of different levels, not concerned only with environmental unsustainability, where the dismantling of the Biennale exhibits comes in, but also with the social unsustainability of an institution that offers ever decreasing levels of job security to the humans it employs. Rebiennale both fits out alternative exhibition spaces and, at the same time, is a useful tool for tackling the housing crisis. Rebiennale has the potential to develop as an online network and discussion platform, but without doubt it still has a certain ‘substance’ off-line.

Its weakness lies in the problem of working as a ‘commoning’ agency in the city, in making these complexities understood from within. Rebiennale is one of Venice’s contradictions: it does not simply map them, nor does it operate on the lines of an NGO with a brief in design and sustainable thinking. Rebiennale is therefore a ‘one-sided’ affair, but it would be wrong to think that simply choosing which side to support means everything will necessarily come into focus. In fact, ongoing probing and investigations are called for, as well as a considerable amount of effort being channelled into systems management.

What is beyond doubt is that being part of the contradictions of a city, being part of the current maze made up of the economy, politics, culture, society and the tangible and the intangible, means that operating ‘merely’ as a collective of designers, artists, city planners or architects is a luxury beyond reach. Commoning as a concept is not a mere interdisciplinary exercise – it is machinic in itself. To use a quasi-quotation, it can be said that commoning should be designed on as many levels as capitalism has infiltrated, while learning how to transform itself into the machine it is today. The challenge for ‘commoning’ is how to become a workshop for new forms of knowledge, jobs and economics.

This brings us to another on the list of ‘should be’ for Rebiennale. Perhaps Rebiennale should be an experiment in economic sustainability, a joint venture, working within and against the current cultural or creative economy. Critics of this economy have already turned the spotlight on its limitations and its ambivalence. There is certainly a positive side; a joke about matters on a local level goes thus: ‘better
a creative Venice than a Venice that is simply a museum’. But it is just as clear that eulogies to creativity as an attribute of the urban economy are a fiction of laissez-faire policy, which, in reality, simply fuel the fire of ever-rising income from property and exploitation of the cultural heritage, as well paving the way for jobs within that heritage to become progressively less and less secure, affecting both those requiring specialist knowledge and those in the service sector in general.

And on this bleak side of the creative economy falls the shadow of the recession, which, at least in Italy, is providing justification for a policy of savage cuts right across the cultural sector. And so the question is: how can we survive and how can we bring about changes with the recession upon us? We need to remember that here too we are dealing with hypotheses, but what seems clear is that the battle for job security is one
that is destined to be lost, as a result of a productivity model structurally designed to do away with job security and to reduce permanent positions, both as a result of the recession and the inadequacy of the entrenched unions.

Therefore new experiments in economic sustainability could pave the way for important inroads into the city becoming ‘common’. Such an evolution depends, among other things, on the ability to harness the ‘militant experience’, transforming it into something that can withstand the shock of all that is individual about the city and to meet diversity head on, drawing power from it, treating it as building block, while avoiding, obviously, the politically correct. In this sense, the very diversity of those involved in the Rebiennale network, something that has, at all times, been its distinguishing feature, is an extremely encouraging sign, but one that is not enough if seen as the ultimate aim of ‘commoning’. Plurality, ideas for meetings and networking, all that is already in place, must rather function as the means for bringing about a transformation of the status quo.